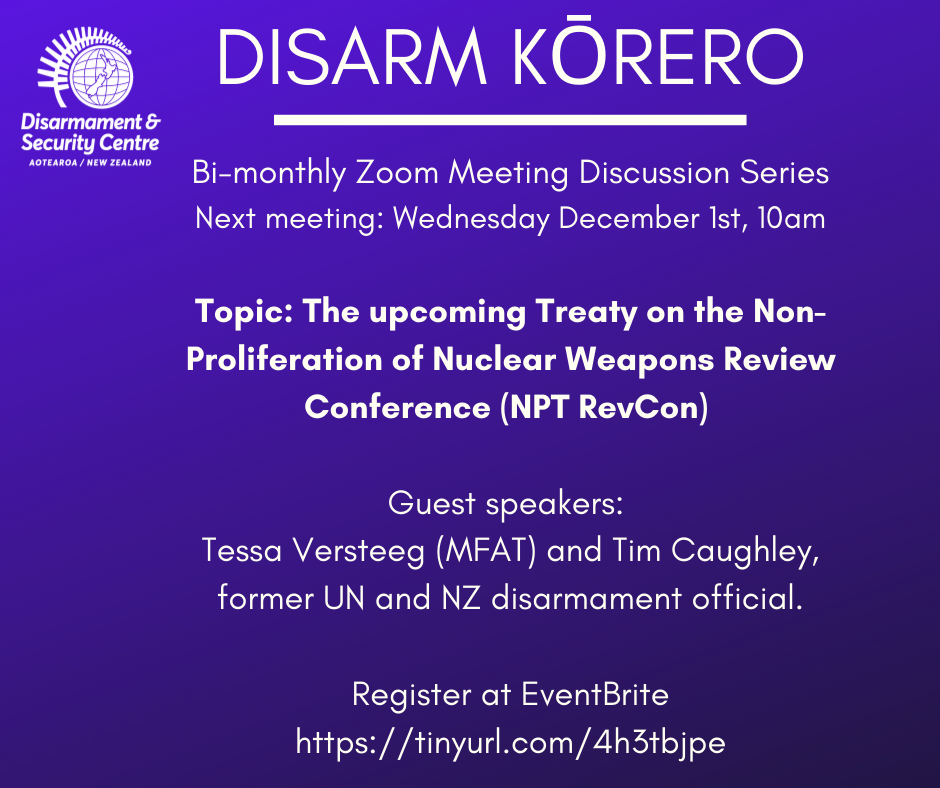 ‍This session of Disarm Kōrero #10 will focus on the upcoming NPT Review Conference which will be held in Jan 2022 at the UN. All welcome!

Register for the event via Event Brite here.

As we lead up to the Nuclear Non-Proliferation Treaty Review Conference (NPT RevCon), come and join us for our Disarm Kōrero session #10 where we are delighted to be joined by two guest speakers, both NZ experts in the field of disarmament, Tessa Versteeg from the Ministry of Foreign Affairs and Trade (International Security and Disarmament Division) and Tim Caughley, a former UN and NZ disarmament official. We'll be discussing what we expect to see at the upcoming NPT RevCon, what the NZ Government will be working on / hopes to see progress on and what issues are likely to arise.

Please tune in to join the discussion, or you're also welcome to just listen in. All welcome!

Register for the event and to receive the Zoom link, via EventBrite here.

A bit of background about the Treaty:

"The Nuclear Non-Proliferation Treaty is an essential pillar of international peace and security, and the heart of the nuclear disarmament and non-proliferation regime. Its unique status is based on its near universal membership, legally-binding obligations on disarmament, verifiable non-proliferation safeguards regime, and commitment to the peaceful use of nuclear energy" UN Secretary-General António Guterres on the Fiftieth Anniversary of the NPT’s opening for signature, 24 May 2018, Geneva.

The Treaty opened for signature in 1968 and entered into force in 1970. The Treaty is often described as 'the cornerstone of global nuclear non-proliferation regime'. 191 States parties have joined the Treaty, including the five recognised nuclear-weapon States (US, Russia, China, France & UK), although four other nuclear weapons states are outside of the regime - India, Pakistan, North Korea and Israel.

Fifty years since the Treaty came into force many issues have arisen - not least that the five nuclear weapon states have made very little meaningful progress towards nuclear disarmament (an obligation under Art 6). Every five years a Review Conference is held where States Parties come together to review the operation of the Treaty. Due to Covid-19 the NPT RevCon was postponed throughout 2021 and is now being held at the United Nations in New York in Jan 2022.

Back to Events
Tweets by DisarmSecureNZ