Commitment to a World Free of Nuclear Weapons: the First Meeting of States Parties 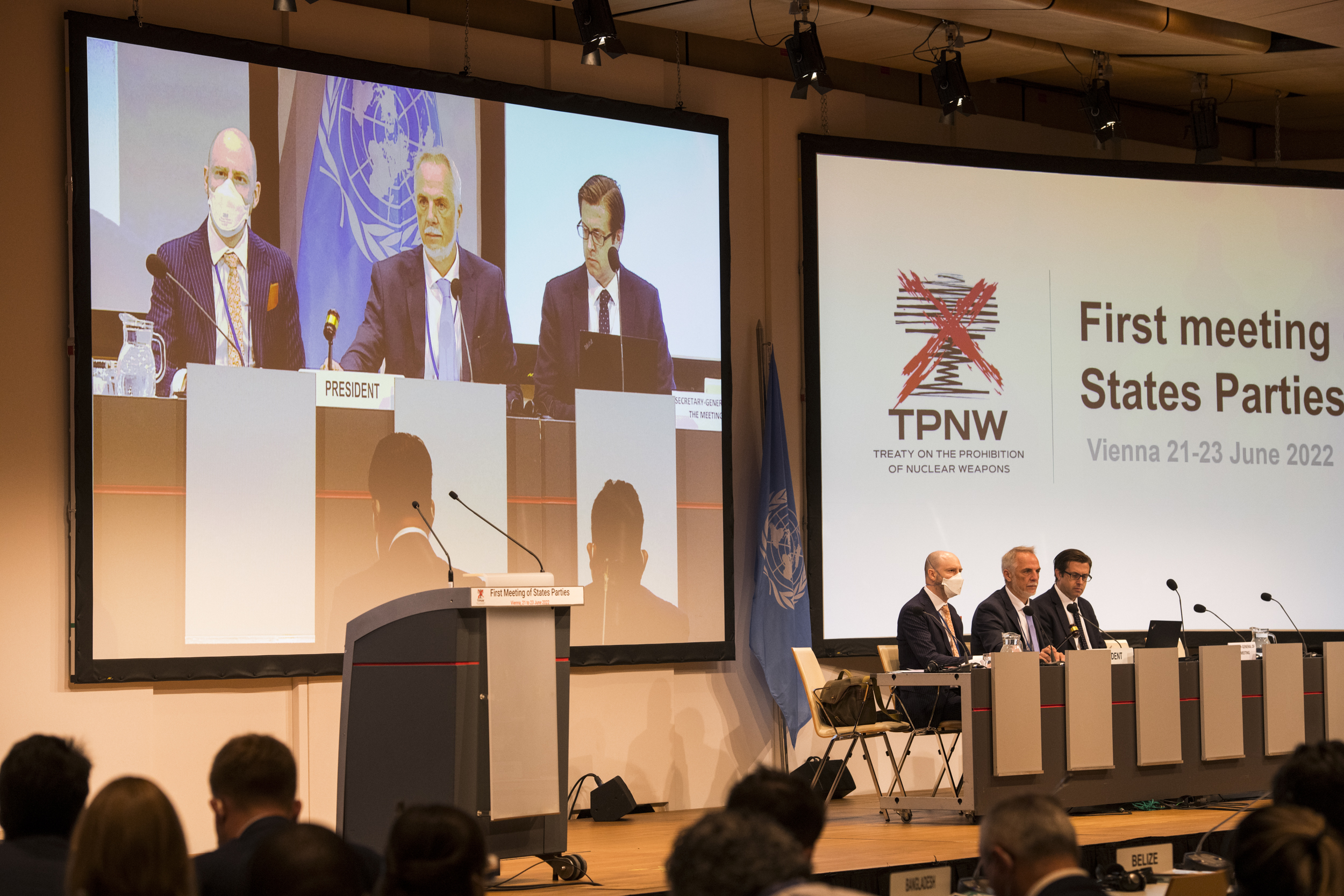 We have no illusions about the challenges and obstacles that lie before us in realizing the aims of this Treaty. But we move ahead with optimism and resolve. In the face of the catastrophic risks posed by nuclear weapons and in the interest of the very survival of humanity, we cannot do otherwise. We will take every path that is open to us, and work persistently to open those that are still closed. We will not rest until the last state has joined the Treaty, the last warhead has been dismantled and destroyed and nuclear weapons have been totally eliminated from the Earth.

‍- Excerpt from the Vienna Declaration of the 1st Meeting of States Parties of the Treaty on the Prohibition of Nuclear Weapons. 23 June 2022.

Last week was a big one for the nuclear disarmament community. It was the First Meeting of States Parties (MSP) to the Treaty on the Prohibition of Nuclear Weapons (TPNW) aka ‘the Nuclear Ban Treaty’. The TPNW is the first legally binding international agreement to ban nuclear weapons and the MSP came at a critical time of renewed global attention to the threat and dangers of nuclear war.

The MSP (21-23 June) was the first time that states, observer states and civil society met to progress the TPNW since it entered into force in January 2021. As of 30 June 2022, the TPNW has 86 signatories and 66 States Parties. Delegates at the MSP worked hard over the three days to agree on a wide range of specific, practical actions to take forward every aspect of the implementation of the TPNW, such as verification of the elimination of nuclear weapons from nuclear weapon states and those that host nuclear weapons.

The MSP was a success in that it produced one of the strongest multilateral declarations against nuclear weapons ever adopted, something that other multilateral disarmament fora would not have been able to achieve. The MSP conference highlighted many voices that are not usually listened to in international security fora, including those of the survivors of nuclear weapons use (Hibakusha) and those exposed to nuclear weapons testing. Young people from the Pacific were supported to attend the conference and made powerful contributions to the discussions. These voices and the backdrop of the war in Ukraine heightened the awareness of delegates of the ever-present threat and unimaginable consequences of nuclear war. This setting unquestionably shaped the concluding Declaration’s strong condemnation of nuclear weapons and any claim that they provide international and state security.

‍The outcome documents adopted by the MSP were: The Vienna Declaration, the Action Plan and the Final Report.

The MSP’s Declaration reaffirmed the humanitarian basis of the TPNW as well as the moral and ethical imperatives that inspired its creation. A key feature of the TPNW are its positive obligations, these aim at redressing the harm caused by nuclear weapons use and testing by assisting victims and the environment. Through the Declaration states display a firm resolve to implement these positive obligations. The Declaration makes it clear that now more than ever states must work for the elimination of nuclear weapons. It affirms the role of the TPNW in stigmatising, de-legitimising and steadily building “a robust global peremptory norm” against nuclear weapons.

The MSP made several decisions for the practical implementation of the TPNW. The Action Plan contains 50 specific actions for taking forward the mission of the Treaty and realising the commitments made in the Declaration. The Action Plan includes actions on universalisation; victim assistance, environmental remediation and international cooperation and assistance; scientific and technical advice in support of implementation; supporting the wider nuclear disarmament and non-proliferation regime; inclusion; and implementation of the Treaty’s gender provisions.

Three examples of actions from the Action Plan include:

For more details check out ICAN’s overview and the full Action Plan here.

Watch our Event on 1MSP:

Go Deeper on the Nuclear Ban: