Nuclear News from New York: Update from the Final Day of the 2022 NPT Review Conference. By Dr Anna Hood. 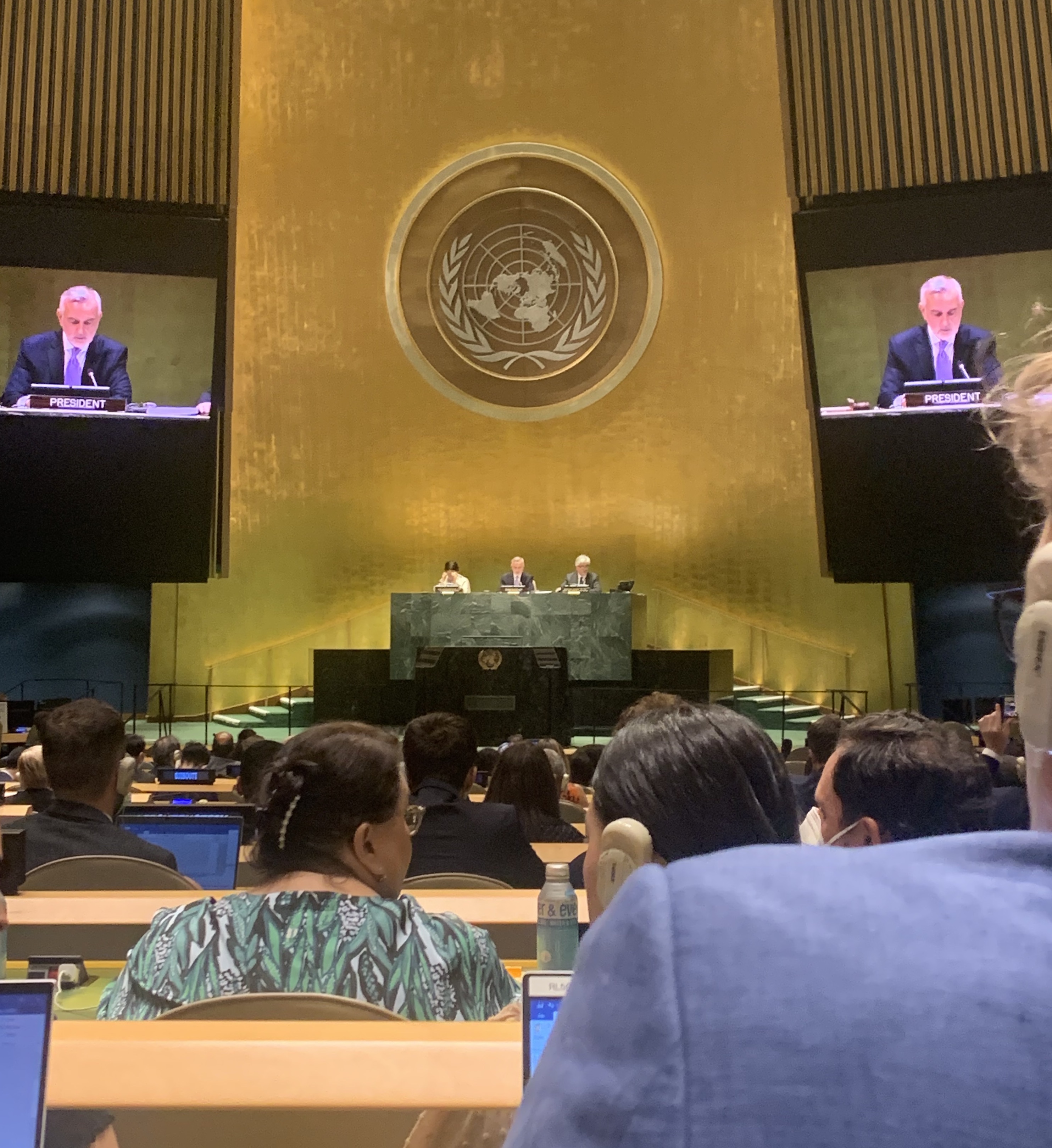 Nuclear News from New York: Update from the Final Day of the 2022 NPT Review Conference

After four weeks of intense negotiations, the Nuclear Non-Proliferation Treaty (NPT) Review Conference wrapped on Friday night in New York. Despite extraordinary efforts and the vast majority of states agreeing on most aspects of an agreement, the Conference failed to reach consensus.

Getting all 191 states that are party to the NPT to agree on measures around nuclear disarmament, nuclear non-proliferation and the peaceful uses of nuclear technology is never an easy job (and indeed multiple other Review Conferences including the most recent one in 2015 have failed to reach a result) but it was widely acknowledged that achieving an agreement this year was going to be tougher than usual. The Conference was buffeted from day one by a host of significant geopolitical and security issues including Russia’s invasion of Ukraine, significant divisions between the P5 nuclear weapons states, concerns about North Korea’s nuclear programme, and tensions about Australia’s pursuit of nuclear-powered submarine sunder AUKUS.

Against the odds, states managed to find ways to navigate all of these issues with the exception of the Russia’s attack against Ukraine. From day one concerns about Russia’s implicit threat to use nuclear weapons in Ukraine and its capture of Ukraine’s Zaporizhia nuclear power plant dominated debates in the Conference. Many westerns states demanded strong condemnation of Russia’s illegal actions in the final agreement while Russia refused to contemplate any suggestion that it was somehow in the wrong. Despite strenuous efforts to accommodate the varying views on the conflict and some very careful drafting, the Russians refused to come on board. As the NPT operates by consensus, this refusal scuttled any hope of the draft agreement being adopted. Instead of a full agreement, the Conference passed a short high-level document that opens the way for a Working Group to continue work on the draft agreement that was on the table.

Had an agreement been reached it would have been a much-needed boost to the NPT. However, the draft final text that was on the table would have been far from a win from a disarmament perspective. Across the course of the Conference, the nuclear weapon states argued repeatedly that the current global security environment meant that the time was not right to take significant steps towards disarmament. Those in favour of disarmament made valiant efforts to highlight that the current security threats meant that this was precisely the time to pursue disarmament, but such arguments had little effect.

·      reaffirmed the past commitments states have made to take steps towards nuclear disarmament including the unequivocal undertaking made by nuclear weapon states in 2000 to accomplish the total elimination of their nuclear arsenals, but there was no deadline imposed or timetable set out for when this must occur;

·      acknowledged that the Treaty on the Prohibition of Nuclear Weapons (TPNW) has entered into force and that it held the first meeting of states parties earlier this year, but it did not state (as many TPNW states hoped) that the treaty is complementary to the NPT or is an effective measure for working towards nuclear disarmament –(indeed, the draft final document refused to even acknowledge that the first meeting of states parties adopted a declaration and action plan);

·      suggested that awareness of the catastrophic humanitarian consequences of the use of nuclear weapons ought to underpin approaches towards nuclear disarmament but not that it must underpin such approaches; and

·      called upon states to implement their disarmament obligations in ways that enable progress on implementation to be regularly monitored and reviewed, and introduced some new reporting requirements but these were very weak and a far cry from the comprehensive accountability measures that many non-nuclear weapon states had advocated for.

The Pollyanna reading of the above points is that they would have provided a few hooks upon which those in favour of disarmament could have sought to build in the years ahead. For example, having some language around monitoring and reporting processes would have given non-nuclear weapon states a bit of scope to demand more from the nuclear weapon states and there was the hope that these requirements could have been further developed and strengthened at the next Review Conference. Additionally, the introduction of humanitarian narratives into the realm of the NPT would have been important for challenging the traditional security rhetoric that has dominated this space.

States in favour of disarmament, however, were well aware that the words in the draft final text were very weak and many took the floor in the final two days of the Conference to express their concern and disappointment. Additionally, in the closing minutes of the Conference,Mexico delivered a joint statement from states parties to the TPNW (includingNew Zealand) that explained that the draft final document ‘falls dramatically short of advancing nuclear disarmament and actually implementing Article VI of the NPT’. The joint statement went on to say that the TPNW-supporting states:

‘will take every path that is open to us, and work persistently to open those that are still closed, We will not rest until the last state has joined the TPNW, the last warhead has been irreversibly dismantled and destroyed and nuclear weapons have been totally eliminated from the Earth’.

The lack of a final agreement and the weakness of the commitments around disarmament that would have been in there had the result been different raise big questions for the NPT’s future. While most states acknowledge that the treaty has played a very significant role in halting the number of states that have developed nuclear weapons, there are serious concerns about whether it will ever deliver for those who hope for a nuclear weapon free world.

Despite the disappointing outcome from the Conference and the uncertainty it brings for the NPT, I have been hugely heartened by the commitment, skill and expertise of those working at the Conference for disarmament. In particular, I have had the privilege to see the New Zealand delegation in action and have nothing but praise for how they have worked around the clock to try and secure the best possible outcome for nuclear disarmament. It’s also been wonderful to see the engagement of New Zealand civil society back home via emails, zoom calls and twitter. As we all regroup to work out the next steps forward and consider what prospects the Working Group holds, it is encouraging to know that, as has been the case for decades now, New Zealand has a great amount to contribute to the quest for a world free from nuclear weapons.