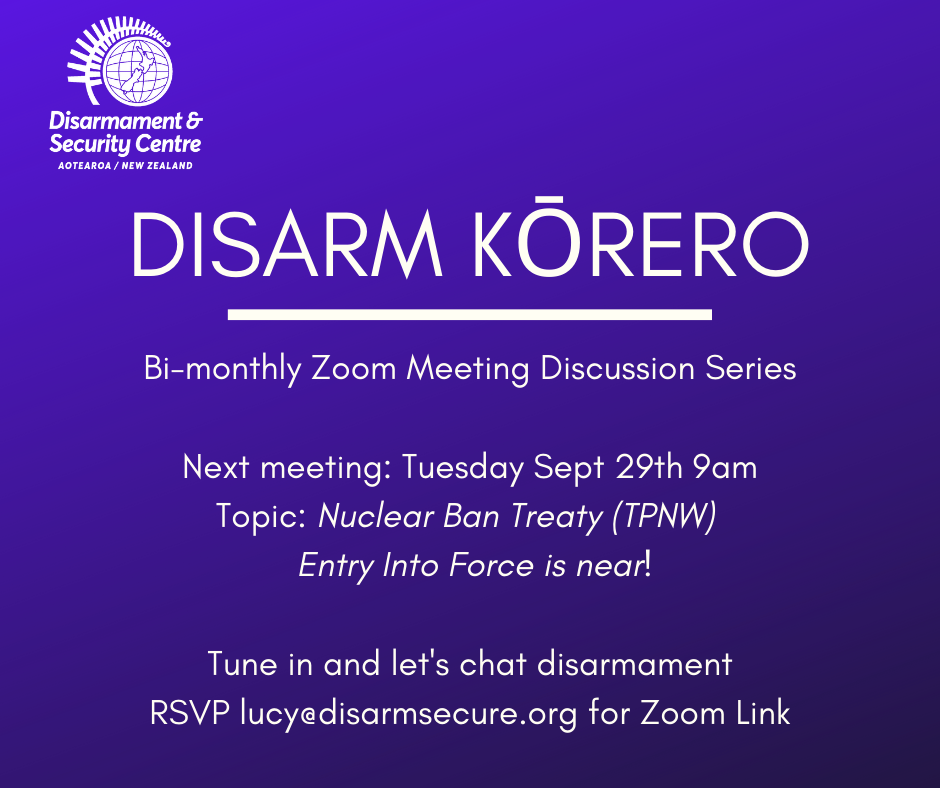 On July 7, 2017, the United Nations General Assembly adopted the Treaty on the Prohibition of Nuclear Weapons (TPNW). The treaty essentially prohibits any state party from developing, testing, producing, stockpiling, stationing, transferring, using and threatening to use nuclear weapons, as well as assisting and encouraging such prohibited activities. It also has a provision for nuclear armed states joining the treaty to work towards a time-bound framework for negotiations leading to verified and irreversible elimination of their nuclear weapons programme. So far 84 countries have signed the treaty and 44 have ratified it, including Aotearoa/New Zealand. In 2020 alone, 10 states have ratified including Saint Kitts and Nevis, Ireland, Nigeria, Niue, Botswana, Fiji, Lesotho, Belize, Namibia, and Paraguay. The states parties are as geographically diverse as they are politically but they are bound together by their shared desire to see a world free from the threat of nuclear weapons. The treaty will enter into force 90 days after the fiftieth instrument of ratification, meaning only six more countries are required for this historic precedent to be set!

The TPNW is a contentious one, though. When the treaty was being negotiated at the UN headquarters in New York, the nuclear armed states and their allies staged a protest outside in opposition to the treaty. US Ambassador to the United Nations Nikki Hayley criticised the 132 countries, and numerous civil society groups involved in the talks stating, “You have to ask yourself, are they looking out for their people?" Hayley believed that they did not understand the nature of global threats and that the treaty would be detrimental to world security claiming, “Is there anyone who thinks North Korea would ban nuclear weapons?”. But this is not the main argument for adopting this treaty.

The president of the International Committee of the Red Cross stated that, “It will not make them [nuclear weapons] immediately disappear. But it will reinforce the stigma against their use, support commitments to nuclear risk reduction and be a disincentive for proliferation.”

Let’s be honest, the road to a nuclear free world is extremely rocky and there will inevitably be potholes, smooth stretches of highway, and roadblocks. But if the TPNW isn’t a good turn in the right direction, the alternative is even rockier! To learn more about what the imminent entry into force means, join our upcoming Disarm Kōrero webinar featuring Disarmament Law expert Dr Treasa Dunworth, and Disarmament and Non-proliferation specialist Dr Lyndon Burford. Come and join in on the discussion or feel free to just listen in as a spectator https://us02web.zoom.us/j/9896432905